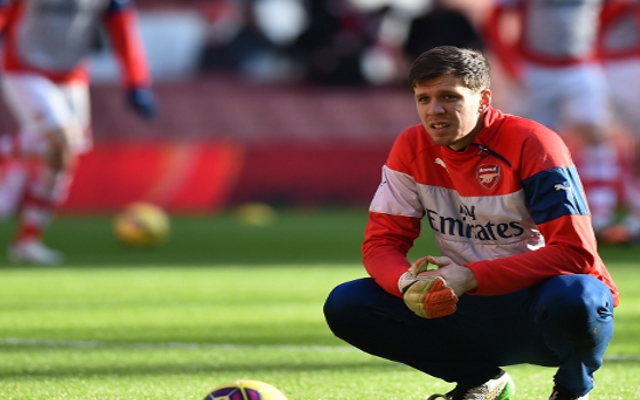 Arsenal’s Wojciech Szczesny has been struggling to get back into the team after being dropped for David Ospina.

Arsenal boss Arsene Wenger has laid down the gauntlet to recently dropped keeper Wojciech Szczesny, challenging him to show character to return to the team, reports the official Arsenal website.

After the 2-0 defeat to Southampton on New Year’s Day, where Szczesny was partly responsible for both goals, the Polish international was caught smoking in the dressing room at St Mary’s Stadium.

He was subsequently fined £20,000 (via the Guardian) following the incident, but perhaps more importantly, was dropped for the following match and has been playing back-up to David Ospina ever since.

“Yes, for me that is the most important when a player is questioned at some stage – how he responds shows you his strength of character, and on that front Wojciech has done extremely well until now,” Wenger told reporters.

“Of course he works very hard. He has responded very well. He is 100 per cent committed in training and works harder than ever. At the moment, the competition is there. I just always have to make the decision who plays the next game.”

Since replacing Szczesny between the sticks, Ospina is yet to concede a goal in his past three appearances, with Hull City, Stoke and Man City drawing blanks against the Colombian.

Having signed a new long-term contract last season (via Arsenal.com), Szczesny’s immediate future may not be called into question, but in Ospina – he has a seasoned international breathing down his neck, who’s currently pipping him to Wenger’s goalkeeping nod.