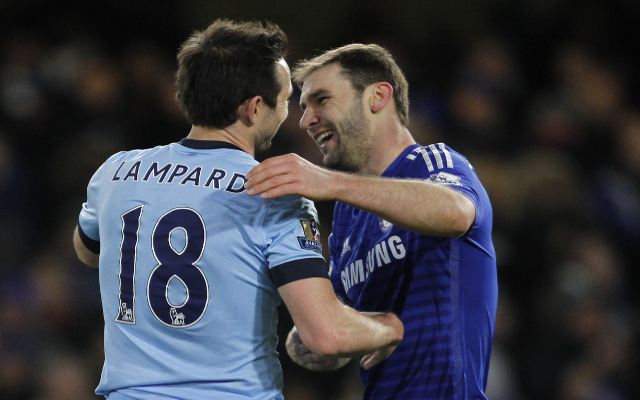 Blues fans applauded their record goal-scorer on his return to west London.

Blues legend Frank Lampard made an emotional Stamford Bridge return on Saturday evening and greatly enjoyed the reception he received from fans of both his current and former sides according to Goal.com.

Lampard came off the bench late on as his Man City side battled back from a goal down to secure a point from their trip to West London.

“I was excited about the day but obviously a bit nervous,”

“I enjoyed it. I was delighted with the reception from both [sets of] fans.

“Manchester City fans have been brilliant for me up there. Chelsea fans, quite rightly, they get behind their team and they showed complete class at the end by giving me an ovation.

“I’m pleased for that moment because I didn’t get that at the back end of last year and I’ve managed to have a moment there today. I’m very thankful for that.” added Lampard.

The draw leaves Man City five points adrift of Chelsea but with 15 games still to play it’s clear that the reigning Premier League title holders are still very much in with a shout.

Lampard netted for City in their previous meeting with Chelsea earlier in the season.