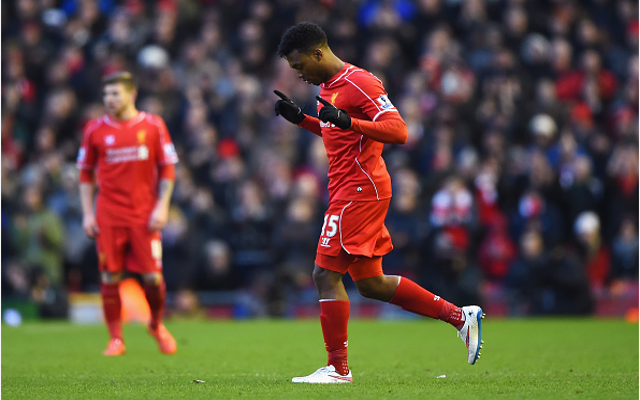 Daniel Sturridge has revealed his delight at making a goalscoring return to the Liverpool team against West Ham United on Saturday. After spending five months out through injury, the 25-year-old took just 12 minutes to find the net after coming on as a second-half substitute.

Sturridge, who was quoted by Liverpool’s official website, said: “It was a great feeling to help my teammates get three points. That’s the most important thing – to just be out there and helping the team win games.

“It was great play by Coutinho. We have a great relationship – he knows my runs and I know the types of passes he likes to play as well. He makes my job easier.

“Once I saw him cut inside, I knew the ball would come and it was just a case of getting it under control and hitting the target.”

“They made it difficult for us at times, but as the game went on we showed our qualities and took our chances.

“We missed a few as well, but we’re improving in each game and long may it continue.

“We’re showing that we’ve got that character and we’re up for the fight. We’ve outplayed some quality teams and been unfortunate not to get the results we’ve deserved. Today we showed another side to our game and that we can fight.

“We got a clean sheet and it was a great performance from Simon [Mignolet] in goal, being commanding on the crosses, because it’s very difficult. They’re very good at set plays, so it was great for Si to show that leadership.

“It was a fantastic all round performance with a clean sheet and two good goals.”

The result lifts Liverpool above West Ham to seventh place in the Premier League table. Raheem Sterling scored the only other goal of the afternoon in a 2-0 win at Anfield.