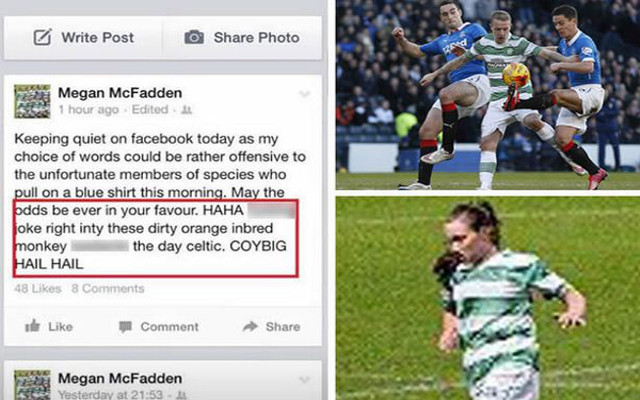 A young footballer has had her career cut short after aggressive sectarian comments made in a Facebook rant reported in the Mirror.

Megan McFadden of Celtic Ladies U-20s was in line to sign for the first team, but in the build-up to this Sunday’s Old Firm derby she took to social media.

Shortly before the Scottish League Cup semi-final she posted, “Keeping quiet on Facebook today as my choice of words could be rather offensive to the unfortunate members of species who pull on a blue shirt this morning.

“May the odds be ever in your favour. HAHAH f***ing joke, right inty these dirty orange inbred monkey b******* the day Celtic. COYBIG HAIL HAIL.”

After being shared around social media it is understood the the club’s management took swift action.