Juan Cuadrado has moved to Stamford Bridge to replace the German…

Andre Schurrle has posted a message of thanks to Chelsea fans following his move to Wolfsburg on deadline day.

The 24-year-old was only at Stamford Bridge for a season and a half, making 65 appearances and scoring 14 goals.

However, he still thanked the Blues fans for their support. He also expressed his support for the team and hopes that they everything they can this season.

The German was replaced by Juan Cuadrado at the London club, and it is widely thought that Jose Mourinho did well to get the £22 million that he did for the winger.

He wrote, “I want to thank everyone at Chelsea FC for the amazing time I had at this great club!! It’s been a real pleasure to wear this shirt!! Thank you so much to all the fans for the great support and love you showed me!! All the best to the team, I hope you can win everything!! Great people!! And now I’m looking forward to be successful with my new team and club!!! Can’t wait to play:))#thankyou.” 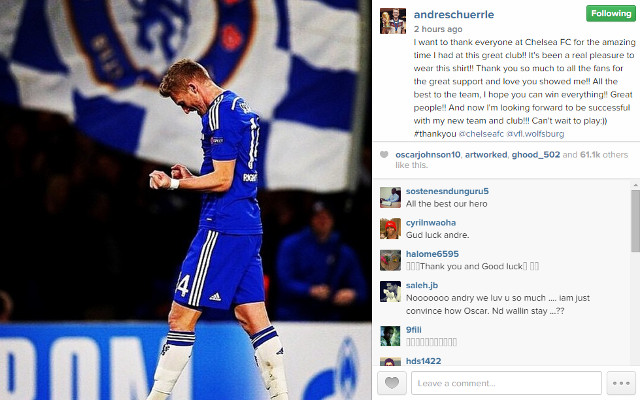