Manchester United have experienced a 19% drop in their fan base recently, while Premier League rivals Manchester City have seen a huge 523% increase…

Fans are notoriously fickle, and Manchester United are learning that they have no divine right to the loyalty of their supporters.

Reports from Spanish publication Sport suggest the Red Devils have seen a 19% drop in their fan base, while their noisy neighbours Manchester City have seen a massive 523% increase. 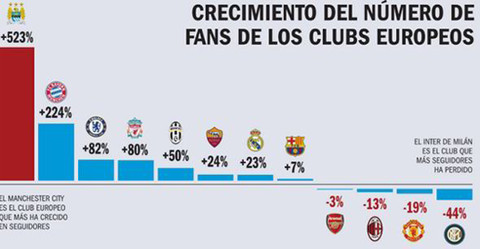 The figures suggest that the Citizens have attracted a whopping 72.5m new fans in China, 34.6m in Indonesia, 24.5m in Mexico, and 10.1m in the United Kingdom.

United are not alone in seeing their fan base dwindling, with fellow Premier League side Arsenal also suffering a 3% dip.

In stark contrast, Chelsea and Liverpool have seen increases of 82% and 80% respectively.