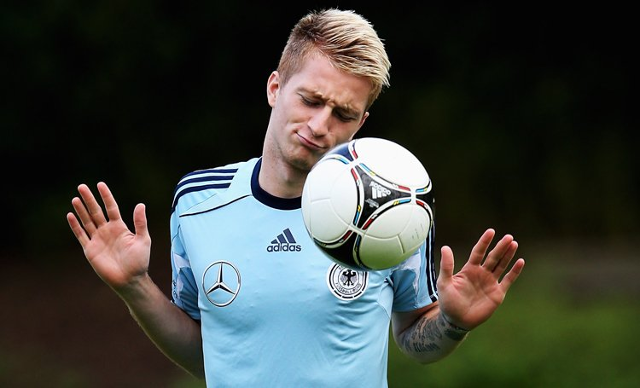 Despite few signings in January, United have laid the groundwork for a summer move…

Manchester United may have had a quiet January on the signings front but their summer looks like it could already be a resounding success with Daily Express reporting the Red Devils are hopeful of signing Marco Reus after working hard behind the scenes to try and wrangle a deal.

The 25-year-old Borussia Dortmund attacking midfielder has a much reported £20 million release clause in his contract that comes into play this summer.

And that has seen him linked with an obscene number of suitors including the likes of Bayern Munich, Chelsea, Arsenal and Real Madrid.

But the report by the Express states that United made contact have made contact with Dortmund over the January window and are now confident they have a deal in place for the German in the summer.

It has been a frustrating 12 months for Reus who missed the World Cup through an injury suffered in a warm up game and he has since suffered further injury this season that has restricted him to just eight performances.

That may go some way to explaining BVB’s incredibly poor Bundesliga position but despite absence and this poor form, Reus has still managed three goals from the middle this season and has made the third most chances of the Dortmund squad.

The signing of Reus would present a considerable coup for United and Louis van Gaal and put them in good stead ahead of the manager’s second season.