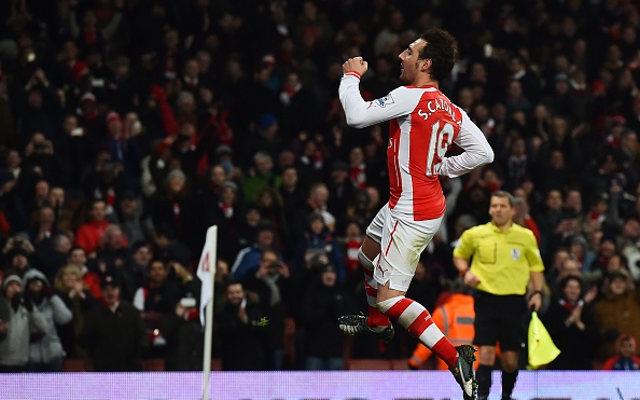 Theo Walcott believes that Santi Cazorla and Christian Eriksen will have a major say in the Derby..

Arsenal forward Theo Walcott has ignited the debate as to which superstar playmaker will steal the show in the North London Derby, Santi Cazorla or Christian Eriksen?

Both midfielders are in superb form and have been dragging their sides over the line in recent weeks and will certainly have a major say in who has the bragging rights come 3pm on Saturday lunchtime.

Cazorla has scored five goals in his last eight Premier League appearances whilst also assisting four, which has led to the Spaniard claiming back-to-back Player of the Month awards.

Eriksen’s importance to Spurs is also well documented as the 22-year-old continues to produce match-winning moments, whilst his free-kicks have become a massive feature to his game.

“They have got a fantastic goalkeeper in Hugo Lloris, who is very sharp off his line. He is making some fantastic saves,” Walcott told the Evening Standard.

“And, of course, they have [Christian] Eriksen, who has been one of the most underrated players in the Premier League this season. He has stood out but we have Santi [Cazorla], who is also in great form and not always getting recognition, either. ”

With the injury to Alexis Sanchez confirmed, Cazorla’s importance to Arsenal is immediately magnified with the Gunners seeking to claim back-to-back league wins at White Hart Lane.