Everton and Liverpool play each other in Saturday’s Premier League late kick-off with both sides having under-performed somewhat so far in the season.

This Saturday’s derby will be Steven Gerrard’s last before he jets off to Los Angeles to play in the MLS with LA Galaxy at the end of the season.

The Reds will start the day off in seventh position and four points off the Champions League places so, will be dying to stay in touch with the top four and take all three points at Goodison Park.

The Toffees on the other hand sit in 12th and are seven points away from dropping into the relegation zone, somewhere no-one predicted Roberto Martinez and his side would be come the end of the season.

It’s likely to be a full blooded affair like most Merseyside derbies and both sides will be doing all the can to triumph, CaughtOffside takes a look at five battles which will likely decide the outcome. 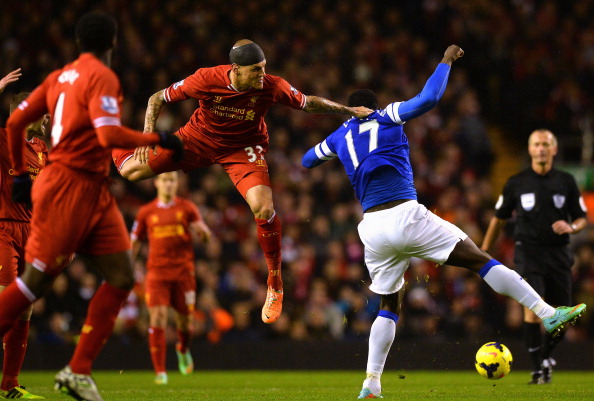 This one will be a physical battle, something which neither of these players are shy of and it’s not an unreasonable expectation for cards of either colour to be issued to one or both of them.

Both of these men are incredibly important for their respective sides and with Martin Skrtel fresh from a winning performance against Bolton Wanderers in midweek, he is likely to be full of confidence and ready for the man mountain of Romelu Lukaku.

Barcelona chief eager for transfer of €60m-rated Manchester City star
May 15 2022, 13:12
Manchester City
Why has such a promising season gone so wrong for Chelsea?
May 15 2022, 10:20
Liverpool FC
Romelu Lukaku hits back at his own agent following comments made about Chelsea and future
May 13 2022, 17:10
Chelsea FC
Raheem Sterling has preferred transfer destination over Spurs & Arsenal
May 12 2022, 14:36
Tottenham FC
Exclusive Fabrizio Romano column: How Erling Haaland transfer impacts Harry Kane, Gabriel Jesus and Liverpool
May 12 2022, 8:53
Liverpool FC
Arsenal in “direct contact” over forward transfer, Fabrizio Romano insists star “will leave” current club
May 12 2022, 7:58
Manchester City
Video: Sterling finishes off unbelievable team move to add a fifth for Man City
May 11 2022, 22:17
Manchester City
(Video) Romelu Lukaku scores Chelsea’s third vs. Leeds United
May 11 2022, 21:23
Chelsea FC
“Tottenham are ahead of Arsenal” in transfer pursuit of Premier League star, says journalist
May 11 2022, 11:19
Tottenham FC
Arsenal ahead of Barcelona in race for potential €75million transfer
May 11 2022, 9:16
Manchester City