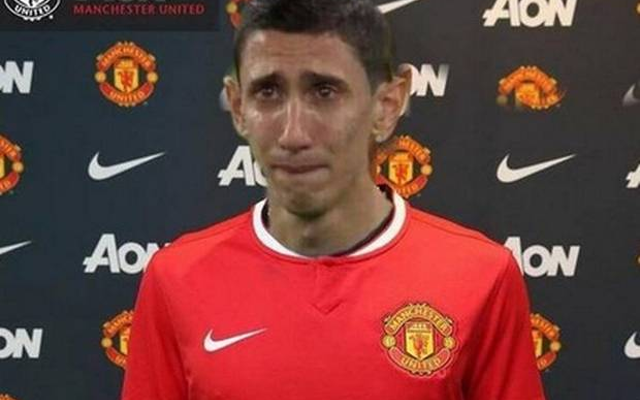 Former Madrid ace has failed to deliver on his early season form as the winger has struggled to adapt to the Premier League.

Argentine midfielder Angel di Maria may be forced to leave Man United this summer after his family had to endure the ordeal of having burglars break into their home whilst they were indoors, according to Spanish journalist Guilleme Balague.

The incident took place earlier this month and has meant that Di Maria’s family have been living in a hotel as they wait for the club to relocate them into a new home.

However, Balague states that the situation runs deep and even indicated that Di Maria’s lack of form was due to the unsettling of his family – with leaving Manchester the only viable solution at this moment in time.

“Life became even harder when he was forced to deal with burglars who broke into his home while his wife, daughter and I think mother in law was also there,” Balague told Norwegian station TV2 (via Daily Star)

“Now he has his family moved to a hotel, but they live with the paranoid logic that something bad will happen to them if they leave the hotel room.

“When you play football and know that your wife and daughter are struggling mentally, it makes you perform worse. And I do not think that the fear they have to go out completely disappear unless he leaves the club.”

Despite being the record signing in British history, Di Maria has barely shown the kind of form which warrants the fee paid for him, even before the recent off-field issues.

Many foreign players have failed to adapt to the culture in England, mainly due to their significant others and children being uncomfortable – so Di Maria leaving because of recent events is not beyond the realms of possibility.