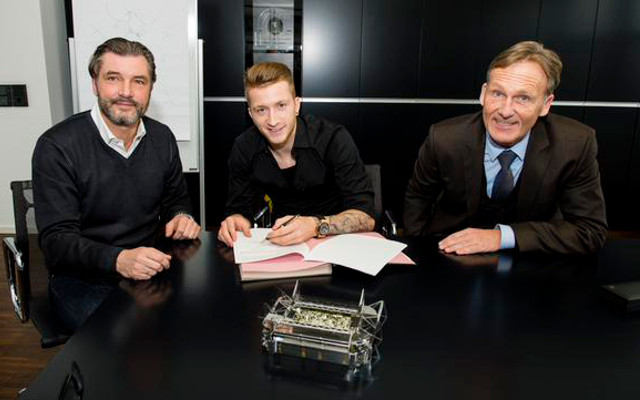 Borussia Dortmund have announced that star player Marco Reus has signed a new deal at the club via their official website.

The 25-year-old’s new contract runs until 2019 though it’s unclear as to whether his much publicised release clause, said to have been set at £20m, is still in place.

The former Borussia Moenchengladbach man has an impressive record for BVB, scoring 49 goals in 104 appearances for the Bundesliga giants, with his team struggling for form during his injury absences this season.

The club’s CEO Hans-Joachim Watzke claimed that Reus could be the equivalent of Liverpool’s Steven Gerrard for the club.

He said, “We never let ourselves be guided by all the rumors and change, there was always a good chance that this exceptional player would deliberately opt for a future with Dortmund,”

He added, “Marco can shape an era in Dortmund, as has been done before him by Uwe Seeler in Hamburg or Steven Gerrard in Liverpool. That Marco has decided in the midst of a sporting crisis for BVB shows a high degree of identification, of which we are very proud.”

Reus has confirmed his delight at agreeing new terms with the side he re-joined in the summer of 2012 having represented the club at youth team level before moving to Mongchengladbach.

He said, “I am very happy with my decision for BVB. Dortmund is my hometown, and my club is Borussia. I look forward to a successful future with our team and our fantastic fans behind us.”