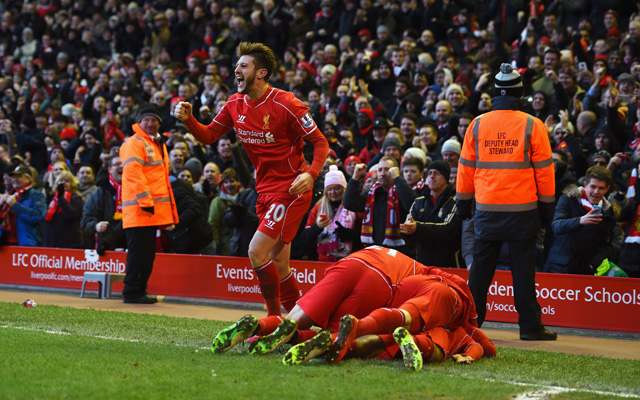 Adam Lallana has claimed that Liverpool can finish third in the Premier League this season, after a morale boosting victory over top four rivals Tottenham Hotspur at Anfield on Tuesday evening.

SEE MORE:
Tottenham And Liverpool Battle For £16m Striker
How Liverpool Can Make Use Of Their Share Of The £5.1bn TV Rights Money: New Faces That Will Make Them Premier League Heavyweights
Twitter Explodes: Liverpool Striker Mario Balotelli Nets The Winner Against Tottenham

Lallana, who was quoted by the Daily Mirror, said: “That’s a massive three points for us, we’re only one point behind Tottenham now and we have got everything to play for.

“We can go higher than fourth, we can hit third place. We’ve got Daniel Sturridge back now and it was great for him to get through 70 minutes.”

The former Southampton midfielder, who played under Tottenham boss Mauricio Pochettino during his time on the South Coast, came on as a second-half substitute to set up the winning goal for Mario Balotelli – his first Premier League strike for the Reds.

“I was itching to get on tonight,” Lallana admitted. “It was a great game and a great atmosphere and against my old gaffer (Maurico Pochettino) who I have a lot of respect for.

“It was end to end and at times it could have gone either way. It was nice to get on the pitch and contribute to the result. I’m pleased for Mario and that goal will be great for him. He needs to keep working hard. If he does that and keeps putting the effort in then the goals will come.”

Lazar Markovic and Steven Gerrard also scored for the home side as they extended their unbeaten run to nine league games. Liverpool are now just three points adrift of the Champions League spots and Lallana is confident that his side can secure one of those four places.

“We’ve got a great squad and we’re gaining momentum,” Lallana added. “We were missing Raheem tonight but Lazar came in and got his goal. You look at the likes of Lazar and Emre (Can), a lot of the new players are settling in well and we’re seeing that out on the field.

“People were questioning the new signings at the beginning of the season but not for one minute was I questioning them. It was always going to take a little bit of time as they’re young players. Now they’ve settled in we’re starting to see the rewards.”