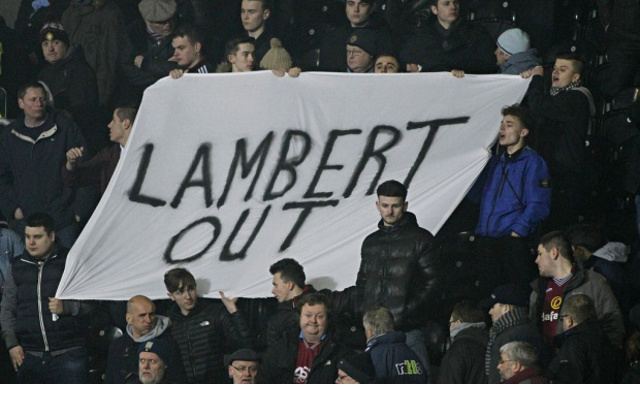 Villa fans unfurled a ‘Lambert Out’ banner during their 2-0 loss against Hull…Paul Lambert came under more pressure from Aston Villa fans after he brought up a half century of Premier League losses in just 101 games last night at Hull.

The 2-0 defeat at the KC Stadium saw the Villains drop into the relegation zone, because rivals QPR picked up their first away win of the season. The result will come as another body blow to Lambert having played against the side with the worst home record in the league.

Unfortunately for the Birmingham outfit though, they were beaten and have now only scored six times in 20 Premier League away trips, bagging just 12 times all season.

If they are to survive one would expect them to need their strikers to start firing again but with main man Christian Benteke having been once again relegated to the bench in their midweek game due to poor form, it doesn’t look like that will happen any time soon. The Belgian striker’s form has been a worry for Villa this season as he hasn’t looked like the same player who previously fired goals in for fun.

The poor performances may down to confidence, and Steve Bruce had said that yesterday’s game was a “mammoth” match for both sides as the psychological benefit of coming out of the bottom three was massive. Following Lambert’s admittance in the Daily Mail that the dressing room was “as flat as you can get”, things don’t look good for the 1996 League Cup winners.

With 13 games to go Aston Villa face an almighty task to stay up, although should they finally find their scoring boots, they may find some solace and resurrect themselves after yet another relegation dogfight.