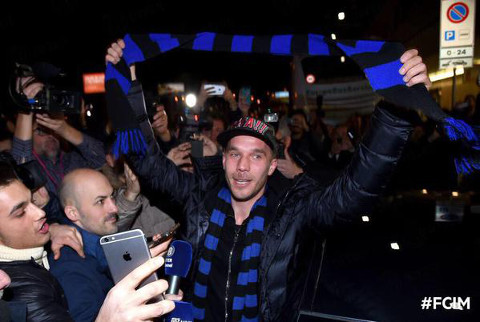 Arsene Wenger will no doubt be pleased…

Lukas Podolski’s much publicised loan deal to Inter Milan seems to have already gone wrong with reports claiming the Serie A club are looking to replace the Arsenal flop.

Podolski was heralded as a world-class signing by the Italian press whilst the German himself seemed to suggest his lack of game time at the Emirates was down to a fractious relationship with Arsene Wenger rather than any fault on his part.

However, Italian news source Calciomercato says Inter are looking to PSG forward Ezequiel Lavezzi in the summer after becoming disenfranchised with Podolski in less than a month.

The German seems to be suffering from the same problem he faced in north London in that he wishes to play every game but refuses to put in the requisite effort or a shift defensively.

Podolski is yet to get on the score sheet with the Nerazzurri and the club have been so unimpressed with the forward that they’ve decided against placing him in their squad for the Europa League.

Unless he improves drastically in the remaining months of his loan, it likely means he will return to Arsenal in the summer.