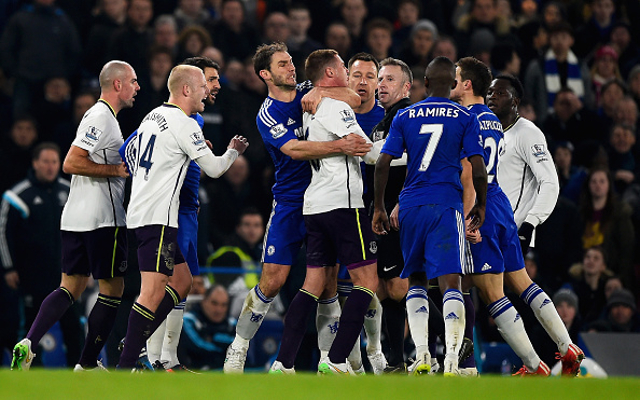 Shock decision from the FA sees them not charge hotheaded defender…

Chelsea defender Branislav Ivanovic will face no action from the FA over his alleged headbutt on Everton’s James McCarthy.

The two players were involved in an altercation during the Blues’ 1-0 win over the Toffees at Stamford Bridge last night.

Pictures and video seen after the event seemed to show the Serbian trying to land a headbutt on the midfielder whilst there were some suggestions he also tried to bite him whilst holding him in a headlock.

However, the FA did confirm that they would be charging both sides for failing to control their players during ugly scenes toward the end of the match.

The decision not to charge Ivanovic was reached by a three man FA panel who deemed the decision not a sending off offence after referee Jon Moss confirmed he had not seen the event in question.

Jose Mourinho refused to discuss the incidents in his post match press conference, even walking out of an interview with the BBC, as he feels his side are being singled out and victimised by English football’s governing body.

This follows recent charges by the FA to both Mourinho and summer signing Diego Costa – who watched from the sidelines last night in the last of his three match suspension for a stamp on Liverpool’s Emre Can in the Capital One Cup semi-final last month.

The news means Ivanovic will now definitely be available for the final of that competition at the end of the month against Tottenham Hotspur.