Lucas Silva could be given an opportunity given injury woes…

All the latest headlines from the newspapers in Spain as Real Madrid’s Cristiano Ronaldo recognises that he has not been at his best over the last few weeks. 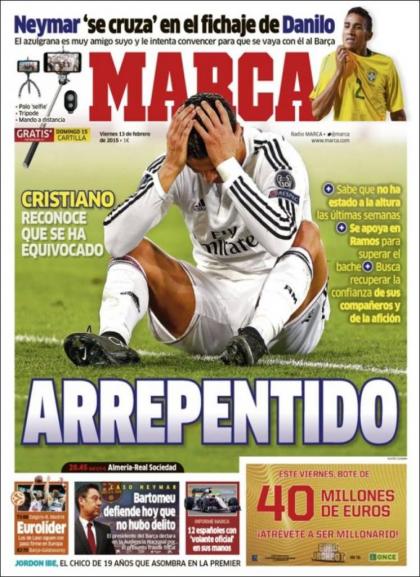 – Real Madrid’s Cristiano Ronaldo recognises he was wrong. He knows he has not been at his best the last few weeks but he has teammate Sergio Ramos’ support to overcome the slump.

– He’s looking to recover the confidence of his teammates and the supporters after a disappointing spell. The red card coupled with his dip in form has resulted in a bit of frustration for all concerned.

– Neymar pivotal in the signing of Porto star Danilo. The Azulgrana is his friend and he tries to convince him to go to Barca.

– Case Neymar. Barcelona president Bartomeu defends today that no crime was committed in the signing of the Brazilian. The Barca President declares to the High Court for the charge of tax fraud. 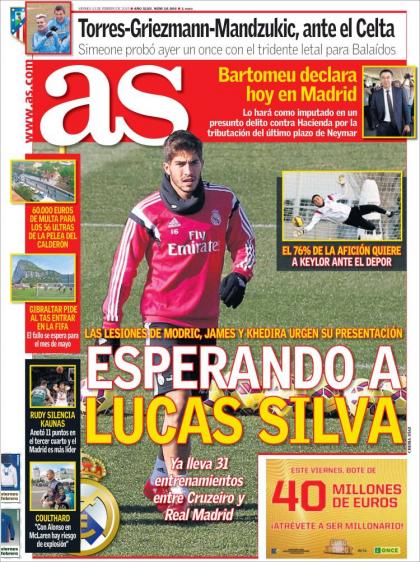 – Injuries to Luka Modric, James Rodriguez and Sami Khedira urge his introduction to the team. He’s had 31 training sessions with Cruzeiro and Real Madrid so he should be fit enough to feature although he is still arguably lacking match fitness.

– Bartomeu testifies in Madrid. He will do so as the accused in an alleged crime against the Treasury in the taxation of the final instalment of Neymar.

– €60,000 fine for the 56 ultras fighting in the Calderon. The authorities continue to stamp down on violence.

– Gibraltar asks the Court of Arbitration for Sport for entry to FIFA. The ruling is expected in May.

– The centre-back has said on COPE: ‘The Coach is the boss even if Leo has a lot of weight’. He says he is “having a blast” and will retire as an Azulgrana after speculation last summer that his time with the club could be coming to an end as part of all the changes.

– One Barca. Luis Enrique’s team are at their best after stringing together 10 wins and are now well on course on various fronts for silverware.

– Real Madrid. Cristiano falls from grace as new images open the debate about his future.

– Leo Messi, in the photo of the year. This image won the World Press Photo.