Failure against Cesena on Sunday could spell the end…

All the latest headlines from the newspapers in Italy as AC Milan coach Pippo Inzaghi is expected to be sacked either now or at the end of the season. 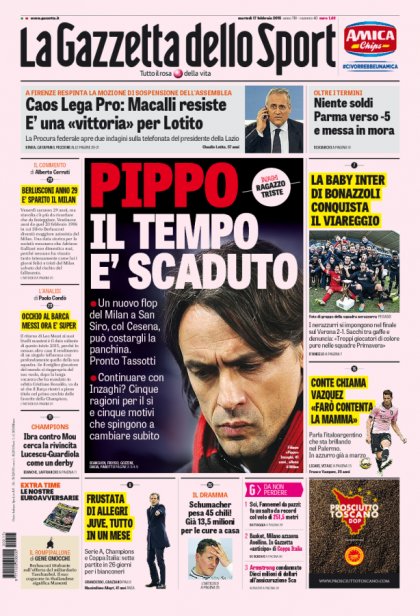 – Failure for Milan at San Siro against Cesena could cost him the bench. Assistant coach Mauro Tassotti is ready.
– Continue with Inzaghi? Five reasons for yes and five reasons that call for a change right away.

– In Florence the push for a motion of suspension is rejected. The federal prosecutors open two inquests into the phone calls of the Lazio president after the controversy of his comments on the referee designation system.

– No money for Parma, heading towards -5 and being put in default. Latest takeover has not saved the club.

– Arrigo Sacchi gaffes and denunciations: “Too many black players in the Primavera.”

– Antonio Conte calls Vazquez up for Italy: “I’ll make my mum happy.” The Italo-Argentine who’s impressing with Palermo speaks. In Azzurro by March.

– Max Allegri frustrations, everything in a month for Juve. Serie A, Champions League and Coppa Italia: Seven matches in 26 days of the Bianconeri as Allegri bemoans the packed schedule in a vital period of the season for his team. 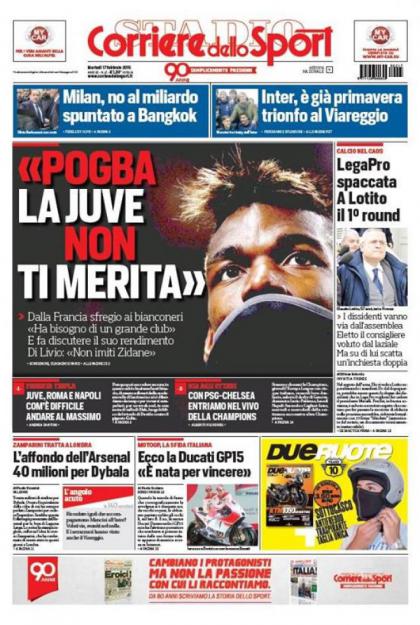 – The Bianconeri jabbed at from France/French media: “He needs a big club.” His performances cause a discussion, Di Livio: “Don’t imitate Zidane.”

– Milan, no to the Bangkok billionaire. Offer of investment for controlling share in the club is rejected.

– Lega Pro divided, round one Lotito. The dissidents leave the assembly. The councillor wanted by the Lazio chief is elected, but there’s a double inquest on him. 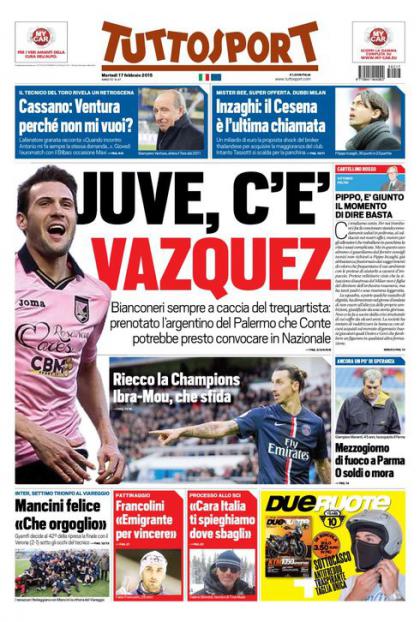 – Bianconeri always on the hunt for a trequartista. Palermo’s Argentine has been shortlisted, Conte could call him to the national team.

– Antonio Cassano: “Ventura, why don’t you want me?” Exclusive interview with the Torino Coach.
– The Granata Coach tells us: “When I see Antonio he always asks me the same thing.”

– Inzaghi: Cesena is the last call. Pippo under pressure to get it right on Sunday otherwise he may well lose his job after a disappointing run of results since the turn of the year.

– Mr Bee, super offer. Milan doubt. €1 billion is the shocking offer of the Thai broker to acquire the majority of the club, but the Rossoneri dismiss the story.

– Crucial midday for Parma, either money or administration.

– Mancini happy: “So proud.” Inter, seventh triumph at the Viareggio. Gyamfi decides it in the 42nd minute of the second half the final against Verona (2-1) with the Coach watching on.