Another scandal as investigation opened into result from last season…

All the latest headlines from the newspapers in Spain as Real Madrid legend Raul has warned his former club that Schalke will be out to shock them in their Champions League tie. 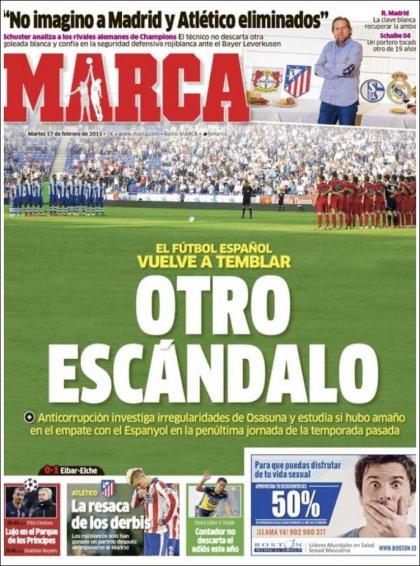 – Anti-corruption investigating irregularities with Osasuna and studying if there was a fix in their draw with Espanyol in the penultimate round last season. The news undoubtedly reflects badly on Spanish football as a whole if the claims turn out to be true.

– ‘I can’t imagine Madrid and Atletico being eliminated’. Bernd Schuster analyses the German rivals in the Champions League.

– The Coach doesn’t rule out another Blanco rout and is confident in the Rojiblanco defensive security against Bayer Leverkusen.

– Atletico. The derby hangover. Diego Simeone has a job to wake his players up as they have struggled since defeated Madrid.

– ‘Raul: Schalke will give everything to spoil Madrid’s party’.

– However, the Madrid legend adds:  ‘…although the champions are big favourites.’

– The LFP looking into cries of ‘Cristiano is a drunk’. The report from Camp Nou certifies it and Barca could face sanctions.

– The trident doesn’t work for Simeone. They register their lowest possession of the season, only 23% and so El Cholo will have to make adjustments to get his team back on track.

– Professional football has its greatest profits in history: €153m.

– ‘Tri-Barca’. Blaugrana seemingly on fire in all departments and here are the reasons why:

– The club gives TV rights to Movistar for next season. Additional revenue on the way.