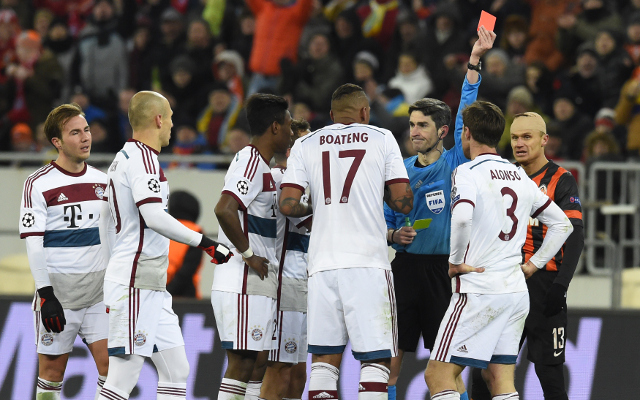 A bore draw in Ukraine.

Despite going into their Champions League Last-16 clash with Shakhtar Donetsk as clear favourites Bayern Munich could only manage a 0-0 draw as Xabi Alonso was sent off on his 100th appearance in the competition.

As expected Bayern dominated the possession and despite playing an attacking 3-3-4 formation could not manage a single decent effort on goal all match and their task was made all the worse by Alonso’s red card.

It was an ill-tempered affair in Ukraine, with Darijo Srna and Jerome Boateng clashing in the first half, before Shakhtar’s Douglas Costa was lucky to only see yellow after what appeared to be a deliberate elbow on Franck Ribery.

Things got even more frustrating for Pep Guardiola’s men as after receiving a yellow himself before half-time, Alonso was shown a second and sent to the stands – hardly a fitting way to celebrate 100 appearances in the competition for the Spaniard.

Bayern have been made the favourites by bookmakers to win the tournament, although will need to improve on this showing when they host Shakhtar at the Allianz Arena in two weeks time if they are to live up to that billing.