Not so unbelievably, West Ham striker Andy Carroll has managed to injure himself, yet again – something which should evoke more frustration from Hammers fans rather than sympathy.

The striker suffered medial ligament damage on his knee in Wednesday’s 0-0 draw at Southampton, and is expected to be out for the rest of the season.

The former England international successfully underwent surgery yesterday, and wanted to share his success with his fans. 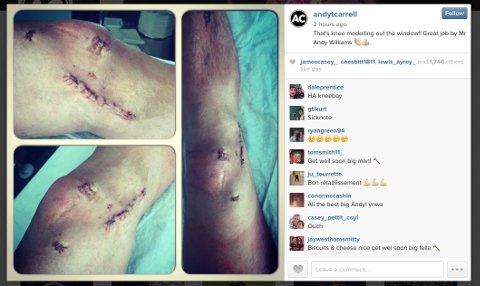 The 26-year-old’s career is being destroyed by injury, with this blow just the latest in a long list of problems. Having not only missed most of last season with an achilles issue, he also missed the first three-months of this campaign following ankle ligament damage in pre-season. He is now unlikely to feature again for the Irons for a few more months, with a return date yet to be announced.