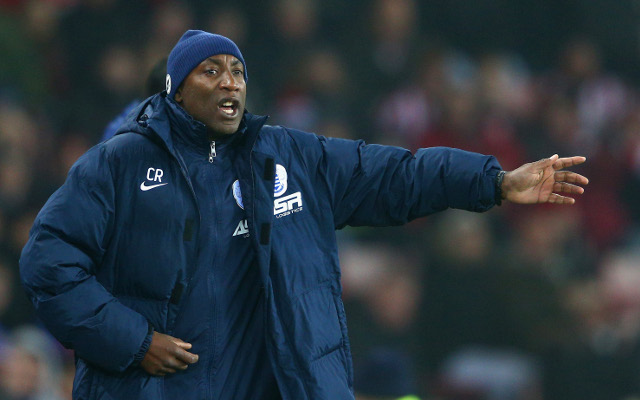 Racism is still rife in football.

Queens Park Rangers boss Chris Ramsey is the latest in football to have his say on the Chelsea racism storm in Paris, and reveals his own personal struggles with race in the sport.

Ramsey is the Premier League’s only black manger, and having experienced his fair share of abuse since his start in the game, which he says often gets “shuffled about and hidden”, will be keeping a close eye on how the authorities deal with Chelsea’s latest incident:

“There’s no place for racism in football. I don’t believe these people are fans of football,” Ramsey was quoted by the Mirror.

“I’ve experienced a lot of racism in my time in the game. I started in the game in 1978. It gets shuffled about and hidden.

“Myself and Les being in the roles we are here is a huge achievement for us, but we shouldn’t be judged on race.”

The Hoops boss also notes that, while racism is a serious concern for all levels of football, it goes well beyond the realms of the sport, and is a widespread problem for society:

“As much as this (racism) is something that has happened in football, it is still a society issue in general,” Ramsey continued.

“Football as a whole needs to deal with these racists – and people outside of football as well. It’s a crime.”

SEE MORE:
(Video) Disgraceful! Chelsea Fans Sing “We’re Racist And That’s The Way We Like It” As They Kick A Black Man Off Metro