All the latest headlines from the newspapers in Spain as Carlo Ancelotti gives an in-depth interview to Marca while Luka Modric eyes a comeback. 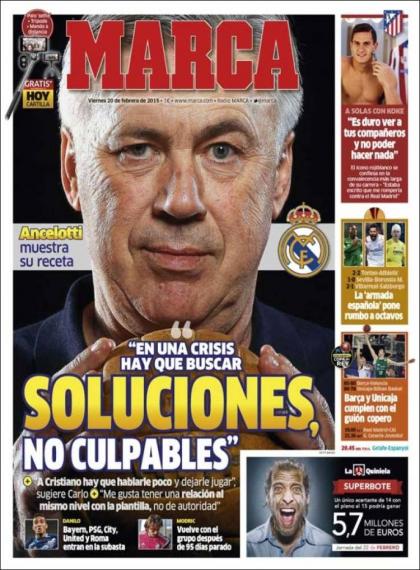 – On the ‘crisis’ at Real Madrid: ‘In a crisis we look for solutions, not guilty parties.’

– On Cristiano Ronaldo’s form: ‘You have to talk less about Cristiano and let him play.’

– Luka Modric. Returns to the group after 95 days without working.

– Alone with Koke. ‘It’s hard to see your teammates and be unable to do anything to help’. The Rojiblanco icon admits in the longest recovery of his career: ‘It was written that I would break down against Real Madrid.’ 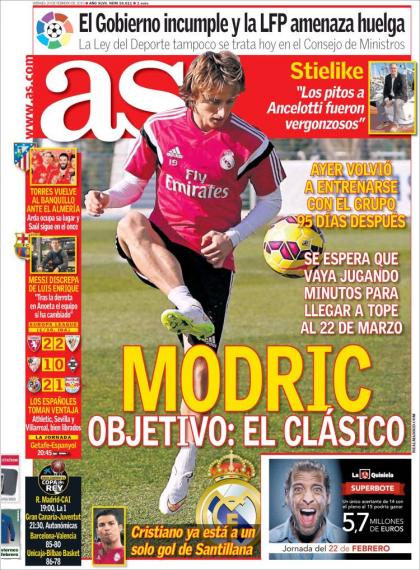 – Modric: Objective El Clasico. He returned to training with the group yesterday, 95 days without working.

– It’s expected he will play some minutes to get ready for March 22.

– The government fails and the LFP threatens strike. The sports bill isn’t now in the Council of Ministers.

– Stielke: ‘The whistles to Ancelotti were shameful.’

– Fernando Torres returns to the bench against Almeria. Arda takes his place and Saul continues in the XI as Atletico start to receive fitness boosts.

– Lionel Messi disagrees with Luis Enrique. ‘The team has changed after the defeat at Anoeta.’ 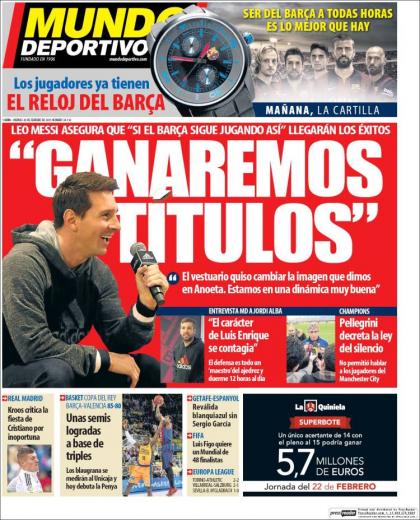 – Leo Messi claims ‘if Barca keep playing like this,’ they’ll reach success. Argentine promises success this season and pinpoints the time things changed: ‘The dressing room wanted to change the image we gave at Anoeta. We’ve found a good dynamic.’

– MD interviews Jordi Alba. ‘The character of Luis Enrique is contagious.’ The defender is a ‘master’ of chess and sleeps 12 hours a day.