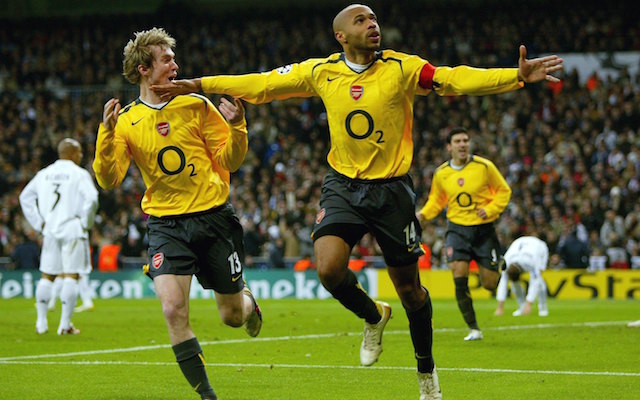 Arsenal manager Arsene Wenger believes that his current Gunners strikeforce is his best in almost a decade, dating back to Thierry Henry’s time with the North London club, reports Goal.com.

The Frenchman explained that his impressive selection of forward-thinking players could rival the Arsenal team of ten years ago, when Thierry Henry, Robin van Persie and Cesc Fabregas were at the heart of his team.

Wenger said: “A prolific Premier League attack should score between 70 to 100 goals in a season,” he told reporters. “We are not there yet, but this attack is our best since Thierry Henry’s days – this one has the most potential since then.

“This weekend is the first time we have been able to line them up all together, so we are yet to see what they are capable of achieving.

“Giroud’s style is less elegant than strikers before him like Robin van Persie, but he has progressed a lot and he is now a complete striker because he has added decisive passes to his game. He works for the team more than most players who contribute that many goals.”

Henry, who returned to Arsenal in a coaching role on Friday, scored 175 league goals in 258 league games for the club, during two spells with Wenger and co. He initially joined from Juventus in 1999, staying until 2007, before returning on loan for a short spell in 2012.

The four-time Premier League golden boot winner will be hoping to inspire his predecessors to a top four spot this season, while the Gunners will also be chasing a run into the latter stages of the Champions League and the FA Cup.