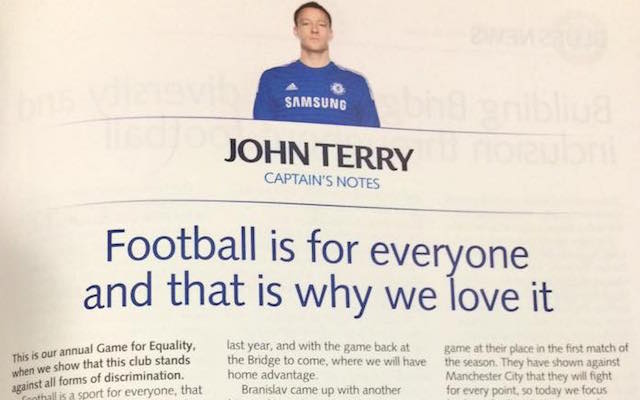 The 34-year-old said supporters from the club, who were filmed pushing a black passenger off public transport in the French capital and chanting racist songs before Chelsea’s match with Paris Saint Germain, were ‘unacceptable’.

Terry is a particularly divisive figure to come out and condemn the incident given he himself was at the centre of racism controversy in 2011 when he was accused of racially abusing QPR defender Anton Ferdinand.

The former England captain was cleared in a criminal court of the incident but was banned for four matches and received a hefty fine from the FA after their independent inquiry found him guilty.

However, in the ‘Captain’s Notes’ section of the Chelsea programme for their match against Burnley, Terry writes: “Football is for everyone and that is why we love it”.

“This is our annual Game for Equality, when we show that this club stands against all forms of discrimination,” wrote Terry.

“Football is a sport for everyone, that is one of the main reasons why we love it, and what happened on the Paris Metro on Tuesday was unacceptable.

“The club has reacted quickly to deal with the situation and will continue to do so.”