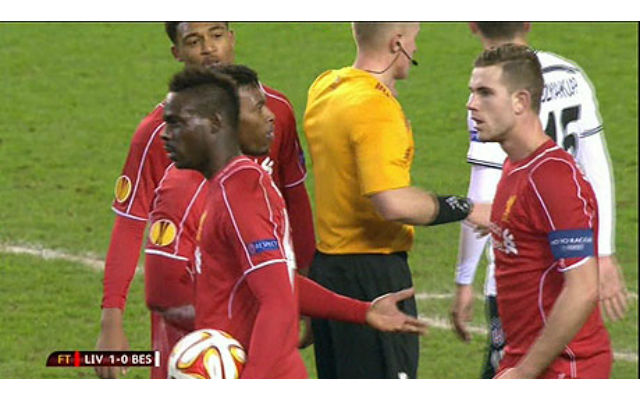 Brendan Rodgers was not pleased with Mario Balotelli’s cameo performance for Liverpool in the Europa League, and claims the Italian is lazy and lacks respect…

Brendan Rodger has been extremely critical of summer signing Mario Balotelli, and has branded him lazy and possessing a lack of respect, according to the Daily Mail.

The Italian forward was yet again at the centre of controversy during Liverpool’s 1-0 win over Besiktas in the Europa League, despite scoring the game winning penalty.

When asked if he was pleased with what Balotelli brought to the team during his substitute appearance, Rodgers had this to say:

“No. Not really. No. We need to ensure that we have everyone working as a team and once we got the penalty he stops working.

“He needs to improve on that facet of his game — to play in his position rather than standing on the side of the football field. He has contributed. He has got the penalty and scored the goal but that is what he is paid to do.

“So he needs to keep that efficiency in his game and show that he can affect the team whether he is asked to play from the bench or from the start. If he works harder than when he came on, he will (become an influence).”

He went on to explain Balotelli’s main problem, illustrating the lack of respect he had for those around him.

“In a different country and a different style of football (scoring goals) would be all that matters,” he said.

“But in this team it is more than that.

“The problem with Mario is I don’t think he has got a lot of respect for anybody.

“He has worked with some of the best managers in Cesare Prandelli, Jose Mourinho, Roberto Mancini — everybody has tried with this man but nobody seems to get to the bottom of it.

“He is an incredibly confident penalty taker and very good at it, but it is that lack of respect that he has.”