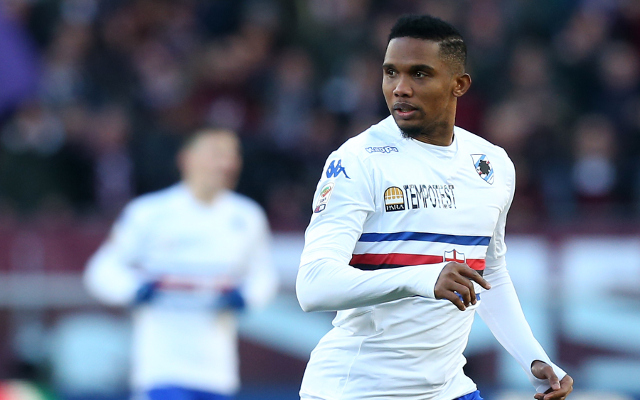 Sampdoria are bemoaning the disappointing performances of Samuel Eto’o…

Former Chelsea and Everton striker Samuel Eto’o has been sensationally declared a rip-off by new club Sampdoria, despite the Italian side only signing him at the end of the January transfer window.

The ex-Cameroon international has barely spent a month with the Serie A side, but his failure to score has angered the club’s president, Massimo Ferrero, while his attitude has frustrated manager Sinisa Mihajlovic.

According to reports, Eto’o was on the verge of tearing up his contract just a week after joining the club, having refused to attend an additional training session. Mihajlovic attempted to claim that they’d put the incident behind them, but Ferrero remains unimpressed.

“Eto’o’s somehow in between a champion and a rip-off,” the club chief told reporters, who were quoted by Goal.com. “I am not the one who needs to comment on him. Eto’o is Eto’o.”

The 33-year-old only spent 18 months in English football, scoring 12 goals in 34 games for Chelsea, before striking just four times in 20 appearances for Everton, who willingly allowed him to leave the club last month.

A frustrated Ferrero added: “[Chelsea boss Jose] Mourinho wondered how old he was and we haven’t worked that out yet either.”