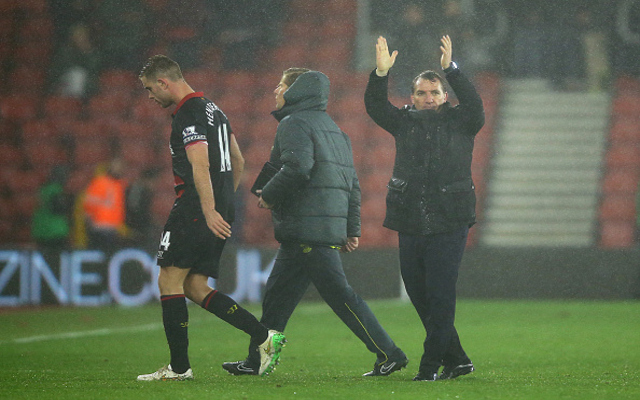 Anfield side take one big step closer to top four.

Liverpool boss Brendan Rodgers has claimed that referee Kevin Friend was right to turn down two Southampton penalty appeals according to Goal.com.

Saints midfielder Filip Djuricic was twice hauled down in the box but Friend decided neither incident deserved punishment.

In another contentious moment Simon Mignolet clearly handled outside the box but the officials deemed no offence had taken place.

On the issue of the penalty appeals Rodgers stated;

“The player has gone over far too easy, no way that was a penalty. I thought referee Kevin Friend was excellent and I think all his decisions were right.

The Liverpool manager sung the praises of his defence as his side made it ten Premier League games without defeat.

“To come here and keep a clean sheet is a great effort.”

“It was a game we wanted a positive result from,” he added.

“Through winning it we would go three points behind third place, it would be a huge result and it was.

“We controlled the game as it went on. Our passing could have been better but the conditions were bad. To come here after a European game and get a win, it’s a great result from the players.”

Liverpool took the lead early on when Coutinho fired home superbly from long range and Sterling made sure of all three points with a clinical finish in the second half.