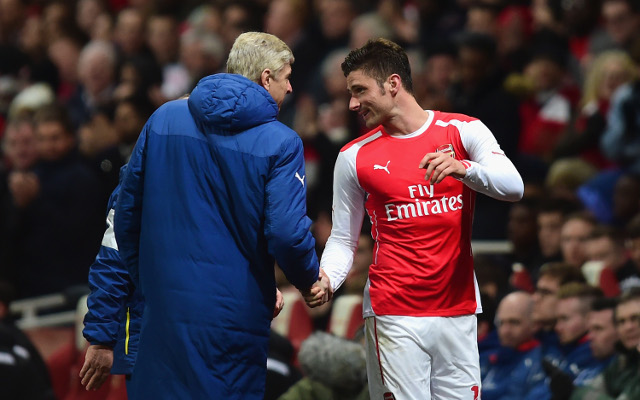 The Frenchman is confident that Arsenal are building a team capable of competing in all competitions.

Arsenal striker Olivier Giroud believes that Arsenal are currently in the process of building a squad consisting of world-beaters, according to ESPN.

“In recent years, our recruitment has been significant, we’re building a team to challenge the biggest sides,” Giroud said.

Following Saturday’s 2-1 victory away to Crystal Palace, the Gunners currently sit third in the Premier League, with only two defeats since the turn of the year in all competitions.

Giroud, who scored what became the winning goal at the weekend, believes that Arsenal’s success has come from the quality of players now available to manager, Arsene Wenger.

“Alexis [Sanchez], we call him ‘Duracell’. He allies talent and determination. [Mesut] Ozil, he’s quietly strong; he’s very calm, almost introverted, very at ease technically, and when his confidence is up, he makes the difference.

“[Santi] Cazorla reads the game very well. I have a special relationship with him, we arrived at the same time, we find each other very well. [Laurent] Koscielny holds things together at the back,” he added.

While their main focus is likely to be retaining their place in the top four, Arsenal also find themselves in the latter stages of two cup competitions. They have to wait until March before they travel to Old Trafford for their quarter-final clash in the FA Cup.

But perhaps currently a bigger priority is Wednesday’s first leg against Wenger’s old side Monaco, in the last 32 of the Champions League. Having spent all of his career in France before his move to the Emirates, Giroud knows how tough the game is likely to be.

“It’ll be a keenly contested game. We’re going to have to do what is necessary against a team that will not surrender easily. If we’re favourites, it’s only by just a little,” said the 28-year-old.