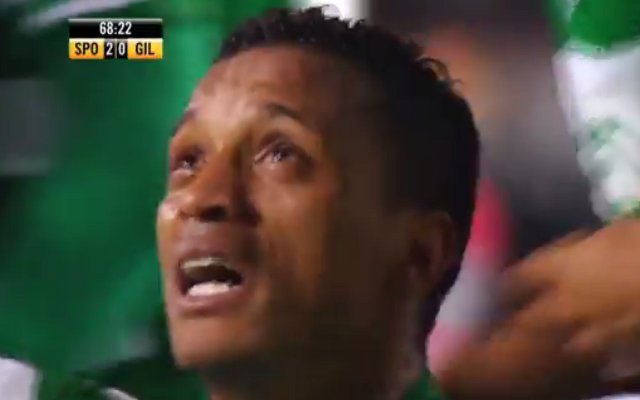 Manchester United winger Nani has shone on loan for Sporting Lisbon this season, scoring eight times in the Primeira Liga and UEFA Champions League so far.

Last night’s strike against Gil Vicente was one of his best ever, and the beauty of it appeared to overwhelm him. The 28 year-old burst into tears upon the ball hitting the back of the net, after lashing a searing strike home from outside the area.

Nani has always had an eye for the spectacular, but the reason he was sent out on loan to Sporting in the first place was his inconsistency – he just doesn’t produce his potential as often as hoped.

“It was a goal like any other,” the Portuguese star explained to Eurosport afterwards.

“I received the ball, saw the goal, shot and I was lucky.”

Asked why he suddenly became so emotional after the goal, Nani explained that he had been introspecting after a tough time.

“I thought about myself and everything that I have gone through,” explained the Cape Verde-born attacker.

“It’s personal stuff, that nobody knows about.”