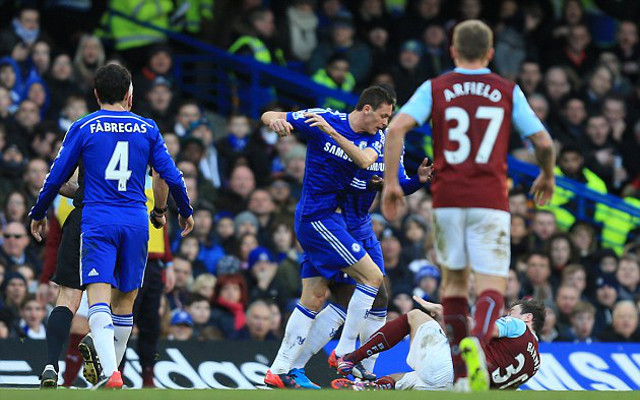 The public are shocked by the reduction.

Chelsea are furious that, following their appeal, the FA have reduced Nemanja Matic’s red-card obtained in the 1-1 draw against Burnley to just two games.

Twitter, however, is even more furious that the ban has been reduced at all…

That scumbag who tried to break Matic’s leg is let scot free by the @fa, He also leads the charts for most fouls pic.twitter.com/y1XPfOoPCF

Chelsea are ‘appalled’? Matic raised his hands. Violent conduct. Three games. No debate. The FA are being led a merry dance by Mourinho.

I have absolutely no idea why Matic’s ban should be reduced.

Terrible decision to reduce Matic ban to 2 games!! Sets a precedent and now makes it ok to react violently to bad tackles!!

Mind Chelsea have got some special treatment there, if that had been Cattermole he would have an extra 3 games just for appealing! #Matic

Matic ban reduction is utterly ridiculous. Shows the @fa are terrified of Mourinho. Continually setting such a poor example. #CFC

I believe Barnes should have been charged and banned … but find the basing of the Matic decision on the force of his push intriguing.

Don’t understand why the FA have reduced Matic’s suspension. Since when did retaliation become graded by what happened to provoke it?

Can we expect Chelsea to warm up on Sunday wearing T-shirts bearing the face of Nemanja Matic?