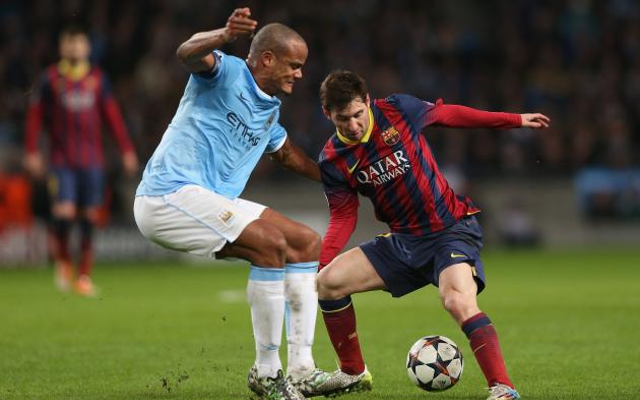 The match ended 2-1 to the Spanish giants…

Vincent Kompany has ignored criticism about his display during Msnchester City’s 2-1 home loss to Barcelona in the Champions League last-16 after he failed to clear a cross which led to Luis Suarez’s opening goal.

After a Luis Suarez brace on his return to England, Sergio Aguero pulled one back for the Citizens in the match and Joe Hart saved brilliantly from Lionel Messi’s powerful penalty to give their side a glimmer of hope ahead of travelling to the Nou Camp on 18th March.

In the match at the Etihad Stadium, the Belgian defender a mistimed clearance nearly found its way into his own goal, as well as steering his clearance directly into the path of Luis Suarez, who duly scored past Joe Hart.

Working as a pundit for ITV Football, Paul Scholes also criticised Kompany for Barcelona’s second goal, “I think Kompany’s at fault here again, Barcelona midfield players, they want somebody to come and dive in. Kompany dived in first. He got back, but he hasn’t got a clue where Suárez is. He hasn’t protected the space at the front post.”

The Manchester City captain’s performances have come under scrutiny recently after he under-performed in a Champions League home defeat to Roma and away to CSKA Moscow. He was also at fault for Arsenal’s opening goal in the Blues’ 2-0 loss to the Gunners in the Premier League last month.

Speaking about his performance against Barcelona, Kompany was bullish and said, “It is simply when the results go [well] everybody will say I am performing well, as long as the results don’t go our way people will say there are several players on the team not performing. All this is part of the game and it doesn’t bother me at all.

“You are going in with an angle. For me I cannot pay attention with it – it is what I have said. [In the] first half we were very disappointed, everyone, and in the second half it was so unfortunate we ended up with ten men [after Gaël Clichy’s red card] as I am curious to see what kind of game it would have become, it looked like we were back in the game.

“For us who knows: you score first goal over there and more pressure drops as you can afford to concede one more goal and just have to score one more.”