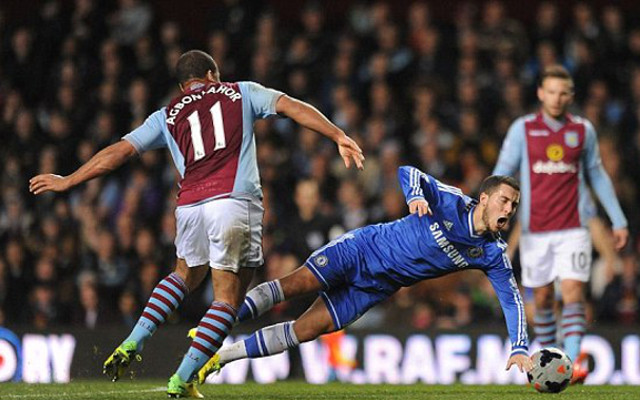 Chelsea winger Eden Hazard has warned Tottenham that kicking him won’t stop him from making a difference in the Capital One Cup on Sunday, reports the London Evening Standard.

There have been accusations in the past that opposition teams target the Belgian for rough treatment in order to slow him down. However, this has not stopped him from becoming one of the best players in the Premier League. Manager Jose Mourinho fears that the 24-year-old could sustain a serious injury if referees don’t give him more protection.

However, the midfielder is adamant that he isn’t affected by the heavy handling, and actually uses it to his advantage by gaining free kicks and penalties. He may have to put this to the test on at Wembley on Sunday.

Hazard said: “Since I started football, defenders have always tried to kick me. I can cope with that, as long as the tackles don’t kill me. This is football. Sometimes I try to keep going but I can’t — the fouls are too hard and I have to go on the floor.”

He added: “But I don’t think things have gone too far. If I create a lot, I can get fouls for free-kicks and penalties, so sometimes [being fouled] it’s good. I always just want to score or make an assist, to make good things for the team.”