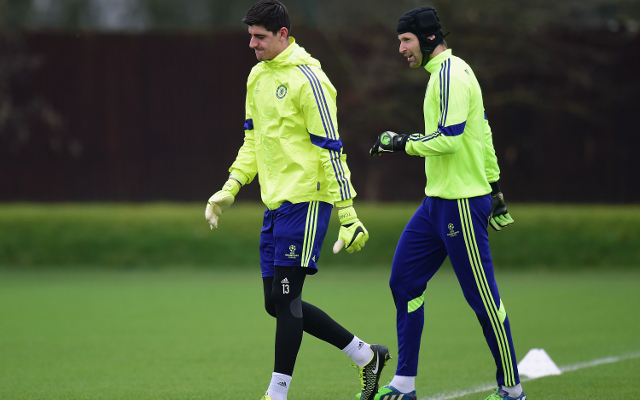 Jose Mourinho to leave everyone guessing until the last moment.

If preparation is key to a good performance in a cup final, then Jose Mourinho is taking a massive risk by leaving both Petr Cech and Thibaut Courtois in the dark over who will start Sunday’s clash with Tottenham, reports the Guardian.

Courtois has established himself this season at Stamford Bridge as the regular number one, but his predecessor Petr Cech has not been completely forgotten about, being used mainly in the cup competitions, as well as the Champions League.

Cech’s good form when called up upon, which has included clean sheets in all five of his Premier League appearances this campaign, has led to suggestions – including support from former Arsenal goalkeeper Jens Lehmann – that he may be recalled for the first time since the narrow victory against Everton earlier in the month.

But Courtois believes that the continued competition between the two keepers has only benefitted the Premier League leaders, as they try to clinch the first trophy of Mourinho’s second spell.

“This season has gone well so far for me. I wanted to play: if you come back from loan, obviously you want to try and play as much as possible. Otherwise it’s better to keep being on loan. But I think Petr and I have both done well for the team, the times we’ve played. We have helped the team every time we could,” the Belgian stopper said.

The 22-year-old is unfazed by the prospect of finding out his fate on the day of the final, suggesting that the delay in the decision is having little impact on their training.

“We are just preparing together, with Jamal Blackman [the third-choice] also, aiming to play that game, working hard to be our best,” Courtois added.