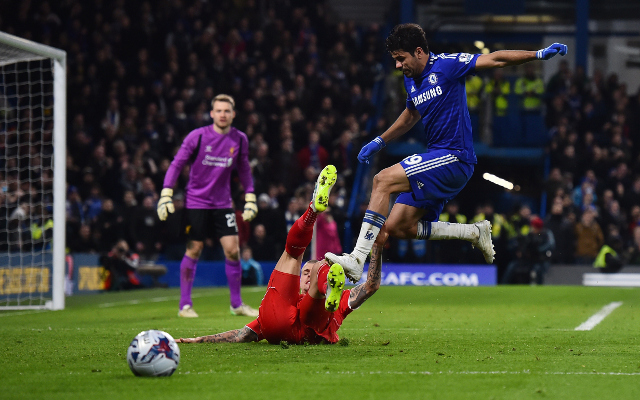 Costa has become the villain of English football this season.

Chelsea striker Diego Costa has vowed that he will continue to play his way, despite a number of controversial incidents since his move to Stamford Bridge, reports ITV.

“I’m not going to change my way of playing,” Costa said.

The frontman made the defiant statement ahead of this Sunday’s Capital One Cup final against Tottenham, where the 26-year-old is expected to start, despite not scoring in his last four games.

Costa only just returned from a three-match suspension last week against Burnley, after being charged for a stamp on Liverpool defender Emre Can in the semi-final clash that gave Chelsea their ticket to Wembley. During the game, he was also criticised for appearing to commit the same offence on Can’s defensive partner Martin Skrtel, but was subsequently cleared.

But Costa has defended his actions, by insisting that he is receiving harsher treatment than any other player in the league.

“I do know now that I have to be a little bit more careful because it’s not the same when I do something or when someone else does it.

“Something I do, it’s talked about much more than another player,” the Spanish international added.

Despite his recent drought in front of goal, Costa has made an immediate impact to his Premier League career, he is currently joint top goalscorer with 17 for the season, and he believes that his aggressive nature is the secret to his success.

“I have to be extra careful but I’m never going to change the way I play. That’s what got me here, that’s the way I play,” he concluded.