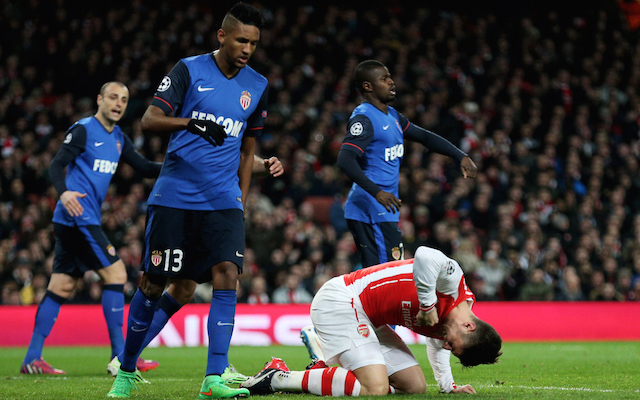 Arsenal striker Olivier Giroud has promised to come back fighting when his side face Everton in the Premier League on Sunday, looking for the perfect response to Wednesday’s embarrassing Champions League defeat at home to AS Monaco.

The French forward was the first to criticise his own performance against the Ligue 1 giants, having missed several clear-cut opportunities. He was hauled off just after the hour mark, prior to Monaco wrapping up a 3-1 win in North London.

Despite receiving his fair share of abuse over his performance Giroud, who was quoted by the Daily Mirror, told reporters: “I am not a better or worse player than three days ago, it is just about confidence and keeping [strong].

“I am really hurting, more than disappointed, it has been embarrassing for me. But I have never given up in my career and sometimes I have had tough games like that before.”

Giroud saw five chances come and go, and admitted that it was a difficult experience for many reasons: “It was difficult because nothing went right, everything was tough for me,” he added. “I tried to keep focused but I understood why the boss wanted to substitute me. It was not my day.

“When you are a striker people expect more from you. I did well recently and scored a lot of goals, but when you miss chances it is like that – you have to question yourself. I will keep working hard and bounce back as soon as possible.”