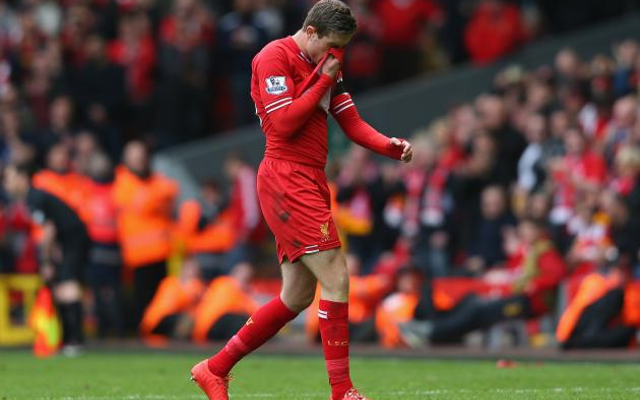 Liverpool midfielder Jordan Henderson has given a heartfelt interview about the club’s failed title challenge last season ahead of this weekend’s meeting with Manchester City, the Times reports.

The 24-year-old was sent off in their game against City last season, meaning he missed crucial end-of-season fixtures against the likes of Chelsea and Crystal Palace, when Liverpool dropped crucial points before eventually conceding the title to this weekend’s opponents.

Henderson insists he is trying to put last season out of his mind, but spoke of his regret at missing games at such an important stage of the last campaign.

“We’ve got a good enough squad and good enough players for whoever comes in to show what they can do. I have to take it as a compliment that people ask what might have happened had I been able to play, but I can’t look at it like that because it’s not about me that got us into that position. It was the team, and the team was good enough to go on and win it whether I was involved or not. It’s just unfortunate that things didn’t end up going our way.

“At the end of the game I was over the moon because it was a big point in the season to beat them, but getting sent off and knowing that I wouldn’t be able to play in the next few games was hard to take.

“So while I was really excited for the lads, because I really felt that we could go on and win the league from there, I also knew that I wouldn’t be involved in three massive games. It took me a bit of time to get over it but I tried to help the lads in any way I could.”