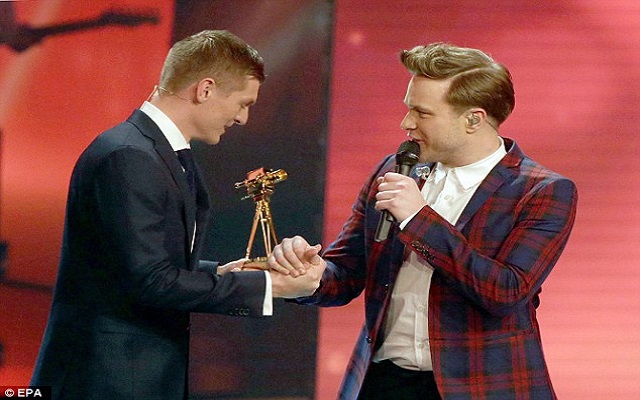 German superstar Toni Kroos was on hand to give Olly Murs his award for “Best International Music” at the Goldene Kameras in Hamburg last night.

Kroos is a self-confessed fan of Murs, Tweeting his praise for the English X-Factor winner back in November after the musician had released his latest track ‘Wrapped Up’.

In the aftermath of the show, both celebrities turned to social media to offer their thanks to the other:

Thanks to my mate @ToniKroos for giving me this award tonight!! Winning this award was increds!! Love ya Germany?? pic.twitter.com/FUbXw7HHeu — Olly Murs (@ollyofficial) February 27, 2015

So honoured to present my man @ollyofficial the #goldenekamera for “Best Music International”. Tune in @zdf tonight ! pic.twitter.com/PdCXsU1axL

It is the first major honour of Murs’ career, after previously failing to covert nominations into victories in both the BRITS and the MTV Music Awards.

Kroos will now return to Madrid, with the World Cup winner’s side facing Villarreal on Sunday night as they try to extend their four point advantage over Barcelona at the top of La Liga.