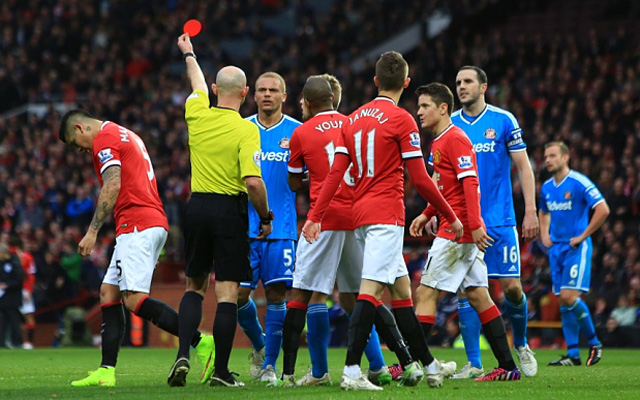 A brace from Wayne Rooney secured Manchester United three invaluable points at Old Trafford, but Sunderland will be left feeling aggrieved after a controversial red card to defender Wes Brown – who was apparently the victim of mistaken identity.

The Black Cats began the game on the front foot, with striker Jermain Defoe rifling over the crossbar:

United slowly worked their way into the game, following the cries of ‘attack, attack, attack’ from their supporters, and came close to breaking the deadlock when John O’Shea deflected the ball onto his own crossbar.

When the breakthrough did eventually come, it was in controversial circumstances. John O’Shea clearly wrestled over Radamel Falcao in the penalty area, only for Wes Brown to be sent-off. Wayne Rooney dispatched the spot kick:

It was also Rooney that made the game safe in stoppage time, turning the ball home from close range after Adnan Januzaj saw his initial effort saved: