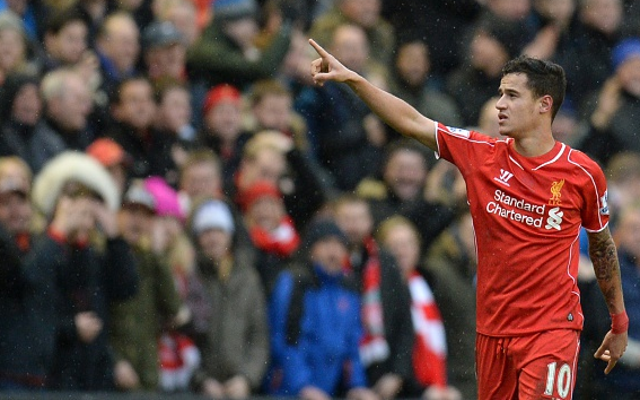 The £8.5m paid to Inter Milan for Brazilian international Philippe Coutinho is fast looking like one of the bargains of the century.

The pint-sized playmaker earned a move to the San Siro in 2010, having shown his obvious potential at Vasco da Gama, but arguably Coutinho never delivered at Inter Milan and was in danger of seeing his raw ability count for nothing.

Even at such a bargain price the investment made by Brendan Rodgers in January 2013 was still something of a gamble, though perhaps less so than subsequent deals for the likes of Mario Balotelli, and the Northern Irishman has done well to nurture Coutinho and show him enough faith to help the player mature into a real world-class talent.

Coutinho has deservedly been lavished with praise following his awe-inspiring display against Man City but regular visitors to Anfield would say such a performance has been on the cards.

Though this is Coutinho’s fifth season in Europe’s top tier the Liverpool man is still just 22 years of age and has time on his side.

Over the course of his time on Merseyside Coutinho has learned that ‘less is more’, gone are the fancy tricks and flicks conducted with sheer bravado though on the whole hugely ineffective, the Liverpool man has become a superb distributor of the ball.

Coutinho rarely wastes the ball and when he does you can tell from his heartfelt grimaces that he’s developed into a player with a superb footballing brain.

His driving runs from midfield are no longer down blind alleys with his head down, Coutinho now holds his head aloft looking for a team-mate with a run into opposition territory.

No doubt a continued run of good form will bring with it speculation of interest from members of Europe’s ‘Elite’ and that’s unavoidable though one would hope that the backing Rodgers has shown Coutinho, both in taking the ‘risk’ in signing him and over the past two years, will result in a feeling of loyalty to a club who are clearly building for the future.