Belgium ace must improve to compete with Lionel Messi and Cristiano Ronaldo.

Chelsea star Eden Hazard has been mooted as a potential challenger to Cristiano Ronaldo and Lionel Messi’s dominance over the Ballon d’Or, yet the winger has much to learn before he can compete with the world-class duo.

Squawka have explored the stats of Tottenham Hotspur midfielder Christian Eriksen and the Blues ace ahead of Sunday afternoon’s Capital One Cup final – in a game that is almost impossible to call – illustrating how Hazard can improve his game by learning from the Spurs man.

Neither Hazard nor Eriksen have reached double figures in Premier League goals so far this season, but the key stat belongs to the Tottenham playmaker – with his five goals from outside the box, as well as two netted from free-kicks: 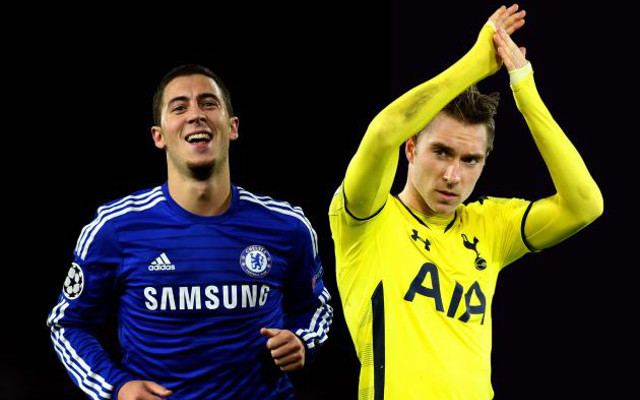 If the 24-year-old is to up his game and compete with the very best – he must begin to try his luck from 20 yards, and work on becoming Chelsea’s set-piece specialist, of which neither is an area Hazard is renowned for – or extraordinarily is even trying his hand at.

As Squawka suggests, Hazard needs to start bringing speculative efforts to his performances. Eriksen has attempted a huge 51 strikes from outside the area, in comparison to Hazard’s 17: 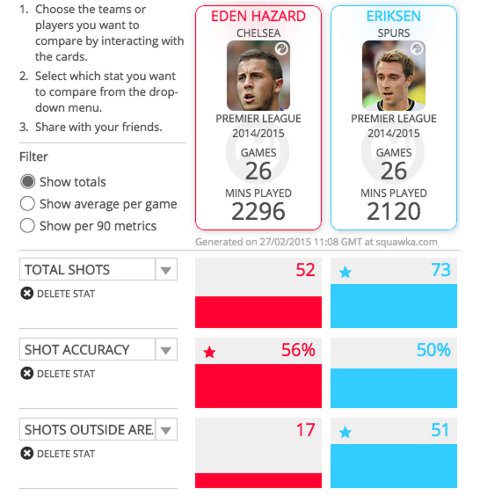 Such stats do not suggest that Eriksen is superior to the Blues starlet – if most had to choose between which of the pair they would rather have in their side – Hazard would be a favourite.

Rather, the Belgian must begin to adapt his game; as it stands the former Lille winger is miles off Messi and Ronaldo.