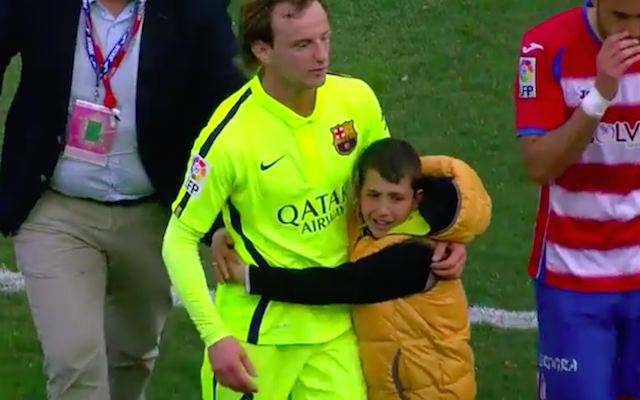 A young Barcelona fan was brought to tears as he met as he hugged Ivan Rakitic following the Catalan club’s 3-1 victory over Granada.

The youngster had got on to the pitch to meet his idol and after wrapping his arms around him to give a hug, it seemed he would never let go.

However, an article by Eurosport hints that all might be not what it seems and the reason the boy is so emotional is because Rakitic refused to give him his shirt, though this is yet to be confirmed.

Rakitic had scored the opening goal for Barcelona with a second by Luis Suarez before Lionel Messi rounded off the win with a third.

The victory means Barcelona are now just one points behind Real Madrid although Los Blancos do have a game in hand and will play Villarreal this Sunday.