Chelsea boss relishes the big occasions – and the stats prove it.

Chelsea may have been haunted by memories of their 5-3 defeat at Tottenham Hotspur in their Premier League clash on New Year’s Day, but they were never going to lose this chance to pick up their first piece of silverware of the season at Wembley.

Goals from John Terry and Diego Costa secured the triumph – Mourinho’s 21st career trophy – and the Blues can expect more to come before the end of this season as the Portuguese coach builds a side that looks ready to dominate.

Solid from the start, limiting Spurs to precious little in the way of chances, Chelsea got the job done in the most pragmatic style possible, scoring two scrappy goals either side of half time to get the job done in the way that only Mourinho knows how – no nerves, no sense of a fightback from the opposition at any point; the Portuguese coach has superb authority for the big occasion.

Mourinho has played eleven cup finals in his career and lost only one of them – the 2-1 defeat to Atletico Madrid in the Copa Del Rey in his ill-fated final season in charge of Real Madrid, by which point he had lost the dressing room, a rare occurance in a career in which he has been largely adored by his players for his winning mentality and superb man-management skills.

Chelsea have lifted this trophy twice before under the 52-year-old, beating Liverpool in extra time for his first piece of silverware in his first spell at Stamford Bridge in 2004/05, and again two years later with a Didier Drogba-inspired 2-1 win over Arsenal. 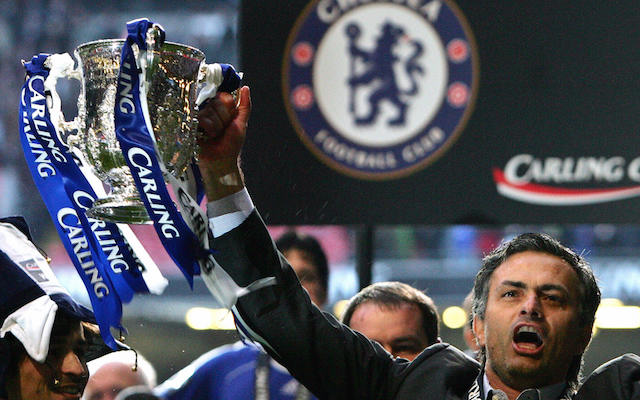 Mourinho’s Chelsea have also beaten Manchester United in an FA Cup final, as well of course as his two Champions League final victories with Porto and Inter Milan – both equally convincing and comfortable 3-0 and 2-0 wins, respectively.

Much was made that it was close to three years since the Chelsea boss’ last trophy, but his time at Real Madrid was not all doom and gloom as he also inspired a 1-0 Copa Del Rey win over Barcelona, who at the time were by far the best team in the world and who won La Liga and the Champions League that same season. Cup finals are simply Jose’s speciality, which is good news for the club’s fans as their chase for the treble marches on.