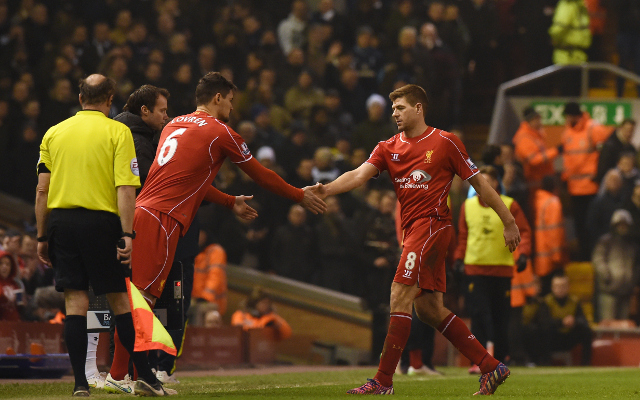 The skipper could be back after a month out

Liverpool boss Brendan Rodgers has revealed that captain Steven Gerrard could make his return to the side during their midweek game against Burnley, according to ESPN.

“He’s coming along very well. He’s building up strength in his hamstring. He’s been outside, so he’s working very hard, and we hope that in the very near future, he’ll be back and available,” Rodgers said.

When asked if Wednesday’s clash at Anfield would be when the 34-year-old makes his comeback, Rodgers responded, “We’ll see.”

The Reds captain has not played since being substituted with a hamstring injury, in the narrow victory over Tottenham nearly a month ago. Gerrard had scored a penalty in the game, which helped his side to a 3-2 win against their rivals for a top four spot.

But Gerrard – who will leave the club for LA Galaxy at the end of the season – has not been overly missed it seems, as Rodgers’s side have extended their unbeaten run in the Premier League, which started in mid-December, and have moved into Champions League qualification contention after Sunday’s victory over Manchester City.

Nevertheless, the club have been keen to highlight Gerrard’s impending return, with a photo on their Twitter page showing the former England captain back in training.

PHOTO: Steven Gerrard working on his fitness alongside Adam Lallana in #LFC training at Melwood. pic.twitter.com/m38cxcpP2J