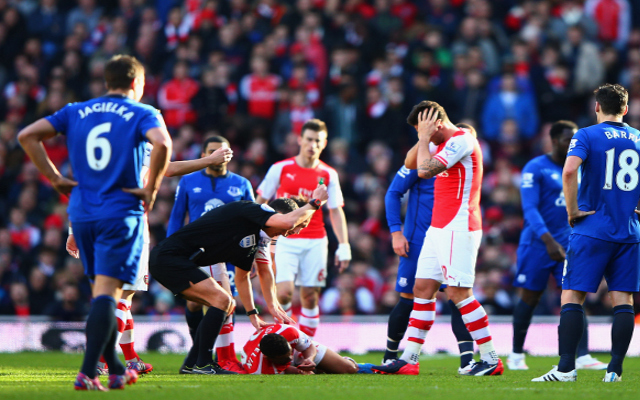 Arsenal midfielder Francis Coquelin could yet feature against Queens Park Rangers on Wednesday despite suffering a broken nose against Everton at the weekend, but will have to wear protective mask, Arsene Wenger revealed in his press conference this morning.

Wenger on Coquelin: “He will certainly need a protective mask if he plays.” #QPRvAFC

Coquelin has been a revelation for the Gunners since being recalled from his loan spell at Charlton in December, providing protection for the back four which was missing prior to his inclusion in the team.

The French midfielder suffered the injury after being head-butted by team-mate Olivier Giroud as both players leaped in the air to head the ball away from Everton’s Ross Barkley.

Should Coquelin miss the game, Wenger maybe tempted to put Aaron Ramsey in an unfamiliar holding midfield role after the Welshman was passed fit for the encounter following his recovery from a hamstring problem.

With the race for the top four hotting up and Man City firmly within their sights, every Premier League game for the remainder of the season will be a cup final for the north London side.

Here is how Coquelin suffered the blow: