Arsenal could open up a significant gap in top four should results go their way.

Arsenal head to into the Premier League game against Queens Park Rangers on Wednesday night looking to keep up their impressive league form.

The Gunners trail only Liverpool in the form guide and now have Manchester City firmly within their sights, a battle for the Champions League is also very much at the forefront of their minds.

Here is how Arsene Wenger’s men are expected to start.

The current no.1 is doing chances no harm after helping Arsenal to another clean sheet against Everton and timed his sweeping challenges effectively. 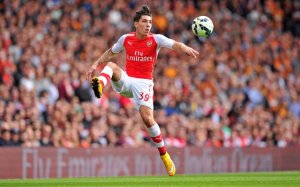 Growing on a weekly basis, Mathieu Debuchy has a fight on his hands to displace Bellerin once he returns from his dislocated shoulder injury.

Wenger has made it clear that Per Mertesacker will not waltz back into the side and that Gabriel was brought in to play, the Brazilian can therefore build on a potential solid partnership with Koscielny.

Has become the leader of the defence and needs to boost his communications to match his pure defensive qualities.

It seems as though the Englishman has been reinstated into his role at left-back despite the impressive performances from Nacho Monreal and it’s up to Gibbs to cement his place.