Almost 50% of players would love to work with the Blues boss.

FourFourTwo asked 123 professional players, currently playing in the Premier League, the Football League, and the Scottish Premier League, who their perfect manager is – and almost half said Chelsea manager Jose Mourinho is the perfect boss.

The Portuguese, who won his first trophy since his return to Stamford Bridge in the Capital One Cup final on Sunday, leads the way in the poll, with 48% of the vote, with Bayern Munich manager Pep Guardiola proving again to be his closest rival with 31%.

Meanwhile it’s a sad state of affairs for England boss Roy Hodgson, as just 1% of the players asked consider the 67-year-old their ideal manager. 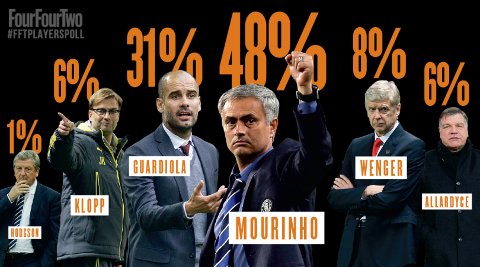 A League One player was full of praise for Mourinho, saying, “Players play for Mourinho. Look what he did at Inter. Players would run through walls for him. That’s 99% of winning.”

Another heaped the plaudits on West Ham’s Allardyce, “I’ve worked with Sam. “He was good, but tough on young kids. I would like to work with him later in my career.”