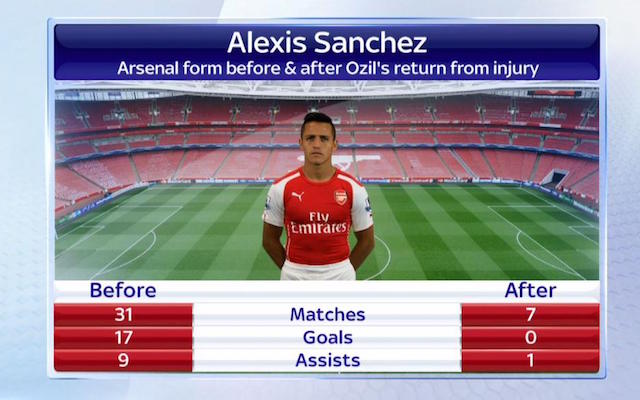 The Gunners two most expensive signings seem to be unworkable together…

Sky Sports have released a worrying stat which proves that Arsenal duo Alexis Sanchez and Mesut Ozil may in fact be incompatible on the field of play.

Looking at Sanchez’s form directly, Sky reveal the Chilean played 31 matches before Ozil’s return from a long-term knee injury that kept him out for three months and in those games scored an impressive 17 goals and acquired nine assists.

However, since the return of the World Cup winning German to the starting Xi, Sanchez has only managed one assist in seven games with his goals seemingly drying up.

In the seven matches since Mesut Özil’s return – Alexis has managed just one assist. #SSNHQ pic.twitter.com/q3OjjkRjqO

Although not conclusive, it’s a worrying trend for Arsenal fans to see that their two best players have so far been unable to perform to their best level whilst playing at the same time.

Perhaps it’s more to do with fitness and fatigue in the case of Sanchez who has played an exhaustive fixture list for the first half of the season.

But the space occupied by Ozil on the pitch in the number 10 role has seen Sanchez’s forays to the centre reduce and the former Barcelona man become much more disciplined on the left wing.

Will it have to be a case for one or the other in Arsene Wenger’s future team selections?