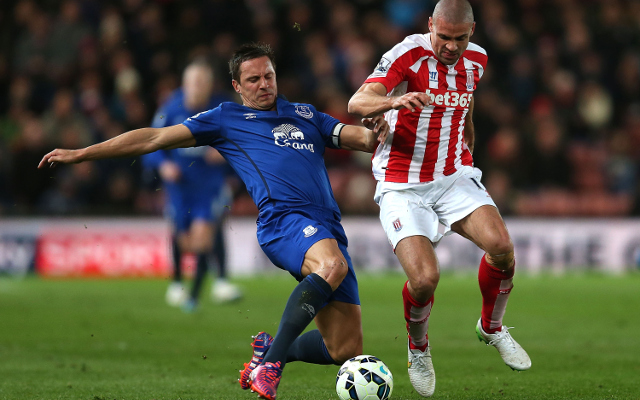 Everton have been dragged into the relegation dog-fight.

Toffees defender Phil Jaglieka has tried to take some of the heat off his manager Roberto Martinez, after last night’s defeat at Stoke led to #MartinezOut trending on Twitter, reports BT Sport.

The 32-year-old believes that while the boss will take the brunt of the negativity, the players are the ones who need to improve heading into the final part of the season.

“We as players know we need to buck our ideas up, start performing better and take pressure off him, pressure off ourselves and start getting some more points,” the England international said.

Despite reaching the last 16 of the Europa League in an emphatic manner, the defeat at the Britannia has left the Toffees winless in their last five league games, and sitting precariously in 14th in the Premier League, just six points above the relegation zone.

Much of the frustration at Goodison Park this campaign stems from their success last season, where Martinez’s side finished one place off a Champions League, but with little change to the squad, this year has been confusingly contrasting.

Jaglieka has warned that the team’s form needs to turn around quickly, before they are dragged any further down the table.

“We have 10 games left now and need to pull our finger out and start picking up points,” he added.