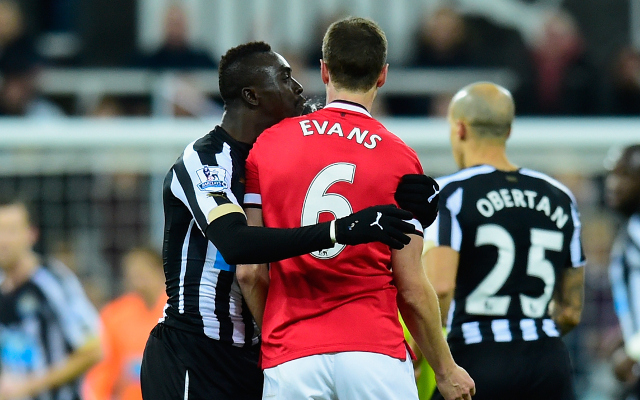 Not enough is being done to cut out football’s worst crime.

With Jonny Evans and Papiss Cisse making the headlines for an unpleasant spitting incident in yesterday’s Premier League game between Manchester United and Newcastle, are we getting riled up about all the wrong things once again?

“I’d rather be punched than spat at” – the mantra by so many ex-pros has been churned out again, and while there’s no doubt that this is incredibly ugly and unsporting behaviour that no one wants to see, it is far less bad than some of the shocking challenges that continue to blight the game and that barely get a mention.

Chelsea’s Nemanja Matic – one of the best players in England this season – missed his side’s Capital One Cup final at the weekend because of his reaction to a challenge from Burnley’s Ashley Barnes. The Serbian clearly felt, rightly so, that he was on the receiving end of a wreckless challenge that could’ve ended his season, perhaps even his career. Indeed we have seen horrific assaults on the pitch that have ended careers, or as good as.

Abou Diaby has been in the headlines again this week as he looks set to be released by Arsenal this summer. Much is made of the Frenchman being ridiculously injury prone, but few bother to point out the horror tackle from Dan Smith of Sunderland all the way back in 2006 that started these problems off. The midfielder was out for nearly a year after having his leg needlessly broken, and has clearly never fully recovered to be the player he could’ve been. Arsenal have been generous – too generous perhaps – and in many cases Diaby simply would not have had a career of any kind to speak of.

While spitting and diving are somehow seen as outside of the game and something we don’t want brought into it, it is somehow deemed acceptable for footballers to brutalise each other in the name of the sport. Sure, football is not non-contact, but if shirt-pulling is a crime in the eyes of the referee then much more needs to be done about players flying in studs up on a regular basis. Why did Dan Smith not receive a lengthy ban? And Ryan Shawcross? And even though it ultimately did nothing, why not Ashley Barnes for his attempted leg breaker on Matic? It would certainly make him think twice about doing it again.

Being competitive and aggressive is one thing, and it of course deserves to be celebrated, but this is still ultimately a game whose primary purpose is to bring joy to those on the pitch and in the stands, so stop ignoring, and even applauding such dangerous and violent play week in, week out.