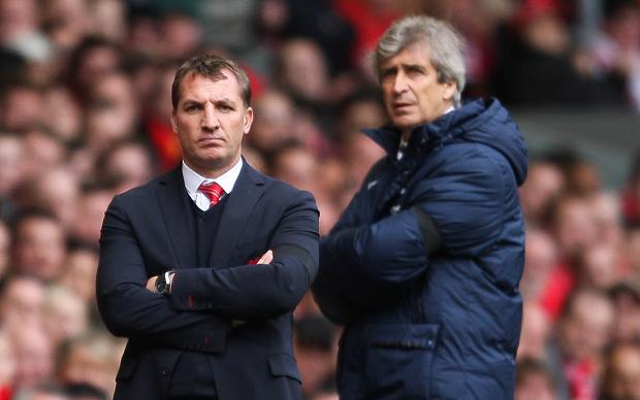 Liverpool are top of the form guide in the Premier League.

Manchester City maybe looking for a new manager as pressure increases on Manuel Pellegrini and as Pep Guardiola ruled himself out of the running, the champions could turn to Liverpool boss Brendan Rodgers, according to the Evening Standard.

The club’s board have a reputation for dismissing managers with both Mark Hughes and Roberto Mancini relieved of their duties once tangible progress wasn’t visible and Pellegrini could soon follow suit.

Failure to defend their title and naivety in Europe has seen disappointment surround the Etihad Stadium and the forward thinking Rodgers may become a realistic target.

Since the turn of the year, Liverpool’s improvement has been evident and largely down to the change in shape enforced by Rodgers which has given the team added fluency and dimension.

According to the report however, Man City may find it difficult to lure Rodgers away from Liverpool given the fact the loyalty is of paramount importance to the Northern Irishman.

However, the former Swansea City boss may cast his mind back to the rough patch he endured earlier on in the season and notice that there was no support at boardroom level which allowed rumours to intensify regarding his future.

Ultimately, Rodgers seems like a coach intent on winning the big trophies and with Liverpool adopting a ‘Moneyball’ philosophy meaning little investment in top quality recruits, Man City may become a lucrative opportunity for him.